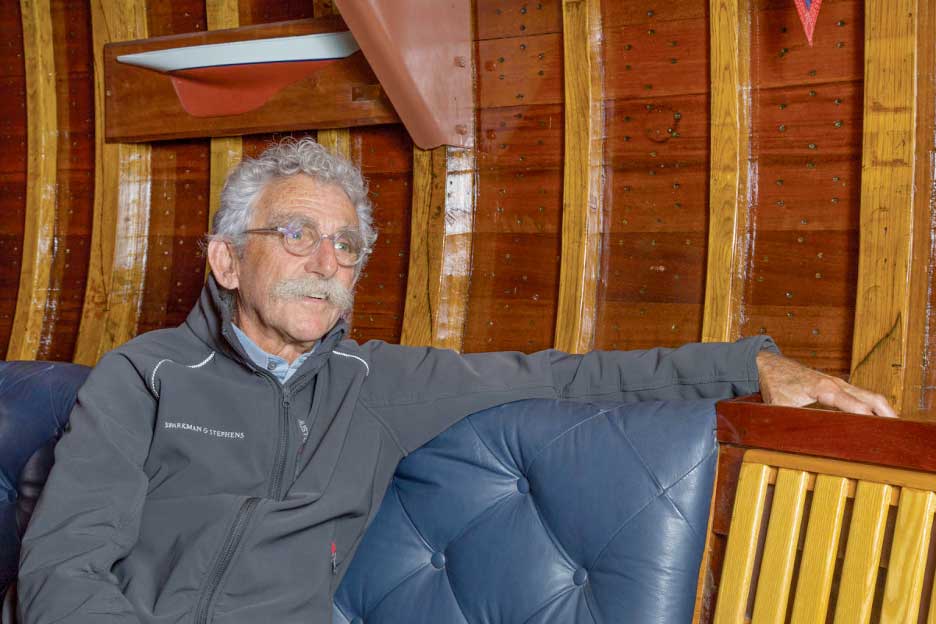 Paul Buttrose was born in Adelaide, Australia, and spent the first decade of his working life as a traveling salesman in the garment industry before serving in Vietnam with a squadron of the Royal Australian Engineers. Following military service Buttrose took a ship from Sydney to Panama and hitchhiked through Latin America to California, where he wound up working on boats.

Paul has spent 40 years in the marine industry — mostly in association with Sparkman & Stephens. He was at the helm of many of the company’s most famous and winning builds. Buttrose worked alongside Rod Stephens as an independent consultant to Nautor’s Swan and consulted with Olin Stephens while managing the refit of Dorade. Along the way he worked with German Frers and established his own yacht management and brokerage business in Newport, Rhode Island.

He is a co-founder of Sail Newport www.sailnewport.org and in August 2020 was appointed President of the International Twelve Metre Association – www.12mrclass.com.

First memory of being on a boat: Age 6 on a tinny — a 10- foot aluminum dinghy — in Cowell, South Australia, with my father and a friend on a mission to catch blue crabs in shallow water.

First time on a sailboat: December 1970. Following extensive travel around the U.S., I stumbled upon some Australian sailors in Fort Lauderdale. With their encouragement, I joined them in Palm Beach for “sail testing” on board the 72-foot ketch Windward Passage. My newfound mates were very excited when they saw 10 on the knot meter. It meant nothing to me; it was my first sail! The next month, on a very steep learning curve, I joined the crew of the Sparkman & Stephens-designed Running Tide, and we won the 1971 Southern Ocean Racing Conference.

First boat you skippered: S&S-designed Swan 48, as professional captain, in 1972. Following several years of ocean racing and deliveries, I met the owner, who invited me on board for the delivery to Newport. The boat was entered for the Onion Patch Series and Bermuda Race. We got along, and I became the hired hand — a dream come true. Following a series of races in Florida, I skippered the boat from Fort Lauderdale to San Francisco.

First boat you owned: 18-foot Lyman Weekender walkthrough with a 100-hp Graymarine. With two young sons, it was the perfect boat for summers in Newport.

Favorite boat you’ve owned: 36-foot lobster boat designed and built by Royal Lowell in 1956. She was the perfect tender as our two sons were sailing Optimists. With a 6-cylinder Cummins diesel and dry stack exhaust, she sounded the part — and what a looker. In all the years of ownership I could never walk away from her without a look back.

Favorite boat you’ve skippered: Windward Passage, a 72-foot ketch designed by Alan Gurney. Coincidentally, I joined her again in California as a crew-member for the Honolulu Race, followed by the delivery to Australia for the Sydney-Hobart Race. Shortly after our return to California, I took over as professional skipper.

Your dream boat to own: 1937 Nick Potter-designed 8 Metre Yucca.

Most rewarding sailing experience: Sailing through the Sydney Heads on Windward Passage in 1976 to compete in the Sydney-Hobart Race. Having left Australia six years earlier, with no solid plans and no offshore sailing experience, it was a thrill to cross the Pacific and arrive home under sail.

Scariest adventure aboard: The 1979 Fastnet Race, off the wind at the helm ofIndigo, a 45-foot Frers design, after rounding Fastnet Rock in the early-morning hours. Three people on deck, all in the cockpit, and we were constantly surfing down waves on a broad reach. Then I heard a very loud roar from behind, and a quick glance revealed a monster breaking wave. For some reason — perhaps a reflection of surfing at a young age — and without hesitation, I turned the boat back in to the wind and up the face of the wave. We leapt over the top, dropped and shuddered down the back side, shook ourselves off and started all over again. Back on course. Five months later, in a frightening coincidence, the Lauderdale-Key West Race start was abandoned due to storm conditions, and the same boat, sans me on board, was pooped by a large wave heading into Port Everglades. The entire cockpit collapsed into the hull.

Most memorable experience aboard: Racing the S&S design Dorade in the 2006 Museum of Yachting Regatta with a stellar crew, including Olin Stephens at the age of 98 and his understudy, Mitch Gibbons-Neff. It was to be the final race for both.

Favorite nautical cause you support and why: Sail Newport (sailnewport.org). With my co-founders’ biases in mind, the organization has thrived since its conception in 1983, standing by the original mission statement: “The purpose of this corporation is to encourage sailing and to administer and promote public participation in sailing-related programs, events and activities in Newport and adjacent waters.”

Favorite quote about the sea: From “Old Fid”: “For every thumb’s a marlin spike, and every finger’s a fid.

This article originally appeared in the November 2017 issue. Photo by Billy Black.

“For every thumb’s a marlin spike, and every finger’s a fid.”

Stay in the Loop

I’d love to chat with you about your next
yachting adventure!